Crop protection has become one of the key concerns in meeting the never-ending demand for food across the globe. Based on the data from 2007 to 2013, the Weed Science Society of America (WSSA) estimated the annual potential loss in the value of crops, such as corn and soybean due to weeds and pests, at $27 billion and $16 billion, respectively. In the past, such cases resulted in the loss of approximately 20% to 40% of agricultural productivity. 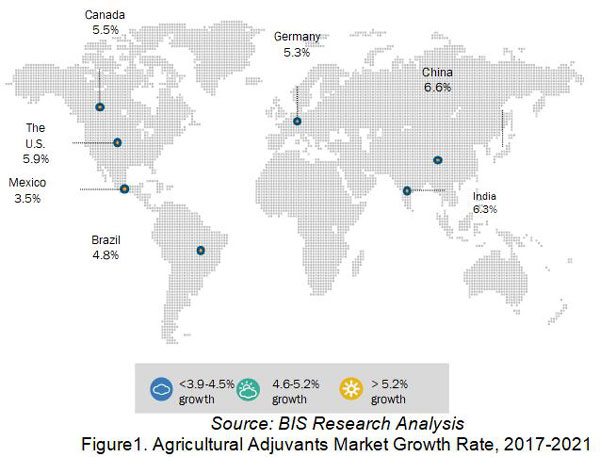 Identifying this increasing demand for crop/plant safety, companies have come up with agricultural adjuvants, which assist in maximizing the quality, productivity and sustainability of the agricultural production systems, disease vector management in the public health systems, and in other industrial and residential areas. These do not directly kill pests, instead, these modify certain properties of the spray solution, which improves the ability of the pesticide to penetrate, target or protect the target organism.
View the all catalog

The concept of “green crop protection” is spreading rapidly across the globe, and it may be the future of the agricultural sector. This is driving the demand for agricultural adjuvants, as these are important to manage the increasing concern over pesticide residues on food and the problem of pest resistance. Many countries are following the trend of lowering the level of Maximum Residue Limit (MRL), and this is expected to continue in the future. Companies in the agricultural adjuvants market across the globe have launched a wide range of products that provide sustainability, crop quality and harvest flexibility benefits. By 2020, it is expected that a significant number of traditional agrochemical companies will enter this market, which will further consolidate the resource.
The agricultural adjuvants market encompasses a wide array of product types, such as activators, utility modifiers and others, including thickening agents, spreaders and stickers. The activator modifiers dominated the global agricultural adjuvants market in 2017, with a market share of more than 50% in value and more than 40% in volume. This type of adjuvant is also expected to see the best growth prospects by 2022 due to its application on a large-scale to increase the efficiency of crop protection products. These modifiers work to improve the biological performance of pesticides by altering their characteristics: be it the particle size, thickness of the spray or herbicide solubility in the spray solution. Though comparatively less utilized, spray modifiers change the physicochemical characteristics of the spray solution.
Check the file